Aifgitar
Monday, January 6, 2020
Facebook Twitter
Loading...
Loading...
Indonesian Lembang Tourism - Lembang is one of the districts in West Bandung Regency, West Java Province. Lembang is known as an area that offers beautiful panoramas. In fact, a number of tourist attractions in Lembang are not only popular among local tourists, but also foreign tourists. No wonder if Lembang is a favorite destination for tourists who want a vacation time.

Besides being rich in nature tourism, the area which was established in 1882 as a tea plantation district also has a number of historic sites, such as the Lembang Square, the pavilion, and the Kawedanan office. Lembang itself comes from the word "Ngalembang" which means stagnant water. That said, Lembang was once a region that was a puddle of Purba Lake Bandung. 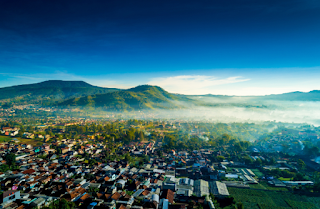 Located in the highlands, the average air temperature in Lembang ranges from 17 oC to 27 oC. Most Lembang residents work as farmers, traders, laborers, drivers, and other informal sector workers.

In this area there are a number of military education institutions, such as the Police Staff & Leadership School, the Indonesian Army Women's Education Corps Center, the Air Force Staff and Command School, and the Aide General Education Center.

Now, Lembang has increasingly developed into an area that offers a variety of interesting tourist attractions and delicious culinary delights. If you want to enjoy a pleasant atmosphere, then Lembang should be your vacation destination.

Not inferior to other areas in Bandung, Lembang has a number of interesting places that will make your vacation even more memorable. To facilitate you, there are a number of recommended tourist attractions in Lembang below.

Since its appearance, Floating Market Lembang has become a successful destination that is never quiet in the holiday season. In this place, you can enjoy a variety of delicious foods, ranging from batagor, grilled durian, lotek, karedok, to various drinks. There are also a number of interesting rides, such as water ducks, boats, water trains, and water bicycles. The Lembang Floating Market is perfect for visiting with friends and beloved family.
2. Farmhouse Lembang

Lembang Farmhouse is one of the favorite tourist destinations of tourists. Understandably, in this place you will feel the atmosphere of Europe which is so thick. There are also a number of instagrammable photo spots that you can use as backgrounds. One of the most popular is the hobbit house. Although the size is quite small, the design is very unique and attractive because it is made of stone and wood.

Not only that, here you can learn how to interact with rabbits and birds. In fact, you are allowed to provide food, touch, and take pictures together. Guaranteed, you will not be bored spending all day at Farmhouse Lembang.

This tourism object which is identical with the Sangkuriang and Dayang Sumbi legend is a tourism icon of the Flower City. The mountain formed by the hardening of the lava layer offers beautiful beauty. In this place, you can enjoy the panorama of the crater basin with bluish green water.

There are nine craters with different characteristics. However, only three of the most popular, namely Kawah Ratu, Kawah Domas, and Kawah Upas. Because it is in the highlands, Tangkuan Perahu Crater is often shrouded in thick fog. Nevertheless, the beauty actually increased.
4. De'Ranch

De'Ranch is classified as an interesting place that carries a unique concept, namely cowboy-style horse farming. This place not only offers a livestock atmosphere, but also provides a variety of exciting rides that are worth a try, such as coffins, flying fox, water balloons, trampolines, fishing games, archery, and milking. If you want to ride a horse, there are riding, riding, pony and delman rides.
5. Dewata Valley Park

Valley of the Gods Park offers an enchanting rain-fed lake beauty. The panorama that is served is very exotic and spoil the eyes. As far as the eye could see, there was a row of shady green trees. From a distance, Mount Lembang and Mount Burangrang stand firmly.

At a number of points, there are instagrammable photo spots. It is suitable for those of you who like selfies. Spending time in the Valley of the Gods Park will make your body and mind refreshed.